This alert came from the 49th Ward’s site, via a concerned dog owner (Thanks!).

Attention Dog Owners: An Important Health Alert Reminder
Dear Neighbor,
A dangerous fungal infection that affects dogs was reported in the area last summer and now that the warm weather is upon us, the risk of the growth of this fungus and contracting the disease increases significantly.

Known as Blastomycosis, the fungus grows in moist soil, soil mixed with sand or vegetation, in areas around water. When conditions are right, spores are released into the air that either can be inhaled by dogs or travel through their open wounds. In very rare cases, the fungus can affect people. Warm weather accelerates the fungal growth.
If not diagnosed and treated properly, it eventually can cause blindness and even death.Blastomycosis is NOT contagious. It can be contracted directly only from the fungus itself and is not transmitted by dogs or people.

The southern Great Lakes have now become a breeding ground for this type of fungus that causes Blastomycosis.Please know that the lake is NOT contaminated and the fungus grows in patches, in small, restricted areas.
Veterinarians previously confirmed cases of Blastomycosis in the area. In one case, the dog contracted the fungal infection in the late summer of 2012, possibly at one of the Rogers Park beaches or lakefront parks. Because he was diagnosed incorrectly at first, proper treatment was delayed, causing permanent blindness in both eyes. Blastomycosis of the eye can be rapid, causing permanent blindness. Other cases were reported shortly after the public became aware of this disease. 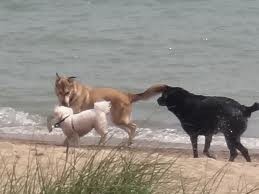 Two summers ago in 2011, another dog contracted the same disease along the lake on the far south side of Evanston near the Chicago border. The dog has fully recovered except for the loss of sight in one eye. It is not known how many cases of Blastomycosis have been contracted due to the lack of any database and undetected cases that are never reported. However, this disease is NOT an epidemic, but it is becoming more commonplace.
Here are the symptoms to look for:
• Fever
• Flu-like symptoms (pneumonia)
• Loss of appetite
• Weight loss
• Eye infection, specifically the iris
• Sudden blindness
• Difficulty breathing (e.g., coughing, wheezing and other unusual breathing sounds)
• Skin sores or lesions, which are frequently filled with pus and do not heal
• Decreased stamina
• Joint pain
• Reluctance to walk, loss of coordination
• Lymph glands swelling

Of course, many of these symptoms are common and Blastomycosis can easily be mistaken for something else. Become aware of the symptoms, pay close attention to your pet’s health and then follow through with a competent DVM veterinarian immediately. Ask your vet to check for Blastomycosis if you suspect your pet may have the condition.
Here is a link to one article on Blastomycosis:
http://www.dogheirs.com/dogheirs/posts/1028-blastomycosis-in-dogs-symptoms-treatment-and-prevention

Another link to an article on the summer of 2012 case in Rogers Park can be found here:

http://www.chicagotribune.com/news/local/ct-talk-dog-fungus-0905-20120905,0,6114310.story?track=rss
Fortunately the dog lived, but is permanently blind and still being treated for the disease ten months after the initial diagnosis.
Other articles can be found by conducting a Google search using key phrases such as, “Blastomycosis – blindness in dogs.”